Just forty minutes away from Athens, Aegina is an ideal destination all year round. Apart from its nice beaches, the graphic alleys and its famous pistachios this island in the Saronic Gulf is full of art and history.
So, let’s sail together to discover the cultural treasures of Aegina…

Arriving at the port of Aegina the first thing we can see is the white Church of Saint Nicholas and The Gate of Aegina, an artwork made by Costas Varotsos. This beautiful sculpture welcomes everyone to the island while it constitutes a symbol of the coexistence and continuity of the rich cultural heritage of Aegina. One could say that its placement at this urban and, at the same time, coastal scenery creates a dialogue between the artwork, the sea and the passer-by.

Aegina used to be an important cultural center in Ancient Greece, but it also played an important role in modern Greek history. It was the first capital of modern Greece after the Greek War of Independence, which broke out in 1821.

It may be interesting to mention that the first governor of Greece was Ioannis Kapodistrias who arrived on the island in 1828. This man played an important role in Greece, but he was also one of the most distinguished politicians and diplomats of Europe. For instance Kapodistrias, as an unofficial Russian ambassador, secured the unity and independence of Switzerland. He was the one to initiate the new federal constitution of 19 Swiss cantons. But let’s go back to Aegina. The first Museum of Greece, the National Bank, the first Mint, the National Library and the National Printing House were all established in this island. All this history is revealed to the visitors while walking the narrow paved streets of the city of Aegina.

There we can see the first neoclassical building in Greece, the Eynard School. Jean-Gabriel Eynard was a Swiss banker and philhellene; this school was built thanks to his donations and he also helped for the foundation of the National Bank of Greece. Another interesting building is the Tower of Markellos created in the 17th century and renovated in 1802, while across the coastal road we will pass by the beautiful house of a wealthy merchant, Konstantinos Vogiatzis. In the center of the town we will find the Historical and Folklore Museum of Aegina housed in a neoclassical building. There we can see representations of different traditional houses, understand the everyday life of villagers and fisherman or admire the traditional and urban costumes.

We are now heading towards the hill of Kolona. It is only some minutes away the city of Aegina and we can easily go on foot. We arrive at the archeological site, which used to be the Acropolis of the island, and the Archaeological Museum of Aegina. This is the first museum built in Greece in 1826. We could say that one reason for Kapodistrias to establish this museum was to fight the illicit trading of Greek antiquities. At the archeological site we will find ourselves among the ruins of the Temple of Apollon; it is a Doric temple built in 520-500 BC, but the archaeological findings have brought to light settlements dating since 3000 BC. The hill “Kolona” (which means “column”) took its name by the Venetian sailormen who used to find their orientation thanks to the columns of the temple.

What about a round trip in order to discover more of Aegina’s treasures?
We are heading towards the west side of the island and we arrive at Plakakia, where the  Kapralos Museum is placed. Christos Kapralos was one of the most important Greek artists of the 20th century. He was sculptor, painter and engraver; he represented Greece at the Venice Bienniale in 1962 and participated in the Sao Paulo Bienniale in 1975. This museum used to be his home and workshop. We can find many of his artworks inside the museum but also on the outdoor space. Opposite to the front side of the museum and in front of the sea dominates the bronze statue Mother, who is patiently waiting for her mariner son to return.

We leave this nice museum and we follow the coastal road. We can make a stop at the graphic port of Souvala. If we are in the mood for another walk we can head to the mainland and visit the medieval village Paleochora, the insular “Mystras”.  This settlement was built in the 9th century and it became the capital of the island until 1826. In this village 366 churches were built – as many as the days of the year – but now only 38 of them are preserved. Paleochora was destroyed three times through the passage of time, one of which was by the Kapudan Pasha Barbarosa, the famous pirate, and the Turks in 1537.

Αt the north-eastern edge of the island, at Agia Marina, we arrive at the most important, at least in my opinion, sightseeing of Aegina, the Temple of Aphaia. The view from this hill is breathtaking and this temple is one of the most well preserved Ancient Temples in Greece.

Aphaia was a Cretan goddess initially named Britomartis – which means “sweet virgin” – or Diktynna. She was the daughter of Zeus and Karme. Minos, the king of Crete, fell in love with her and pursued her. Britomartis in her effort to get away from Minos jumped into the sea and was brought to the shore of Aegina where she became invisible (=aphaia). 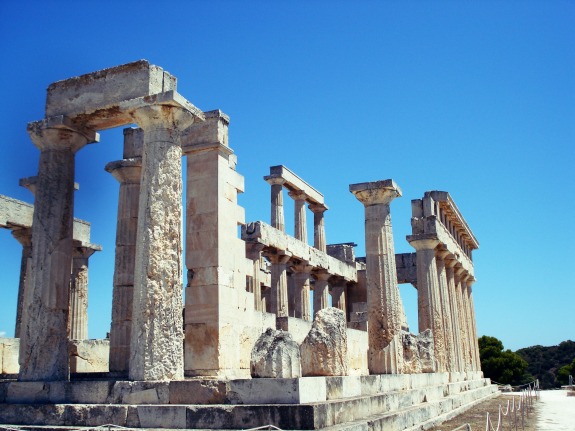 The temple we sea today is dated around 490-500 BC and it is of Doric style. Nevertheless, archaeologists have fount that this was a place of worship since the Mycenaean period.  The temple was built with a local limestone, while the statues were made of Parian marble and used to have colours. It is said that this temple was used as a model for the construction of Parthenon. Findings of this archaeological site are placed in the museum of there, in the National Archaeological Museum in Athens, while a great number of the pediments is preserved in the Glyptotheque in Munich.  It is worth mentioning that the Temple of Aphaia, the Temple of Posidon in Sounio and the Parthenon form an isosceles triangle.

There is one more important Ancient Temple in Aegina, but unfortunately we can only find some ruins of it. It is the Temple of Ellanios Zeus, the oldest temple in Europe! According to the Greek mythology, during a long period of drought in Greece, an oracle of Delphi declared that Aiakos – son of Zeus – should pray to his father to send rain. Aiakos prayed and his request was satisfied, therefore he erected this temple in order to worship Ellanios Zeus. In the place of the temple we can now find the church of the Prophet Elijah. The view is amazing, since we are in the tallest mountain of Aegina, and this place is included in the 500 most historical and of exceptional natural beauty sites in Greece.

At the foot of the mountain ruins of the Hellenistic period exist, as well as a small traditional settlement called Pachia Rachi or Pachiorachi, as the locals call it. So what about another walk before finishing our tour? Pachiorachi was the birthplace of the sculptor Ioannis Karakatsanis and some fighters of the Greek Revolution. The flag of the Revolution was raised on 23 March 1821 in the Church of the Taxiarches, dating from around 12th or 13th century AD.

Since ancient times, Aegina has been an important cultural center and the “art of aegina” has been imprinted on works of sculpture, coppersmithing and pottery. The rocks produced by the place itself gave birth to famous artisans who learned to chisel the stones; we can still admire theirs works on different houses of the island. Aegina continues to attract men of letters and artists to this day. From the paintings of Yiannis Moralis and Nikos Nikolaou to the sculpture of Costas Varotsos and the wonderful series of watercolors by Andreas Georgiadis, it is clear that Aegina acts as a natural “Muse” to people.

Our cultural walk comes to an end… There are many more beautiful places to discover in this island, like Perdika, Anitseo or Marathonas. The first thing that will capture your attention is its natural beauty, the endless blue of the sky and the sea and, of course, the Greek light. Nevertheless, in every spot of this island you will find a trace of history and art, like the ones we discovered together.
So next time in Athens and in the mood for a nice expedition you know where to go!

♥ A little more…
For architecture lovers there are some more admirable buildings in addition to the aforementioned: the Ralli’s Mansion, the Oikia Karapanou, the Mavrokordatou-Finley Mansion, the Trikoupi’s Mansion designated by the Ministry of Culture as a work of art and finally the House of Rodakis which was built in 1880 and has received worldwide recognition for its architecture, thanks to Dimitris Pikionis who studied it in detail.

To check the bibliography and sources check the post in Greek.